Gandalf The Grey, But Not So Wise

When I was a teenager we had two Keeshond dogs: Gandalf the Grey (Gandy for short) and Kaila. 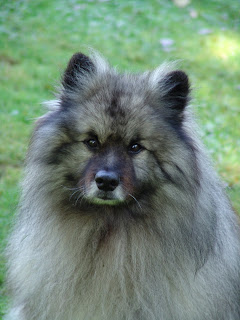 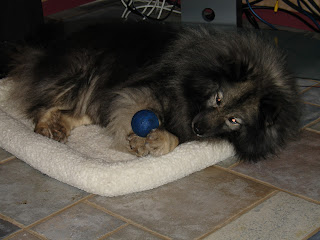 Kaila: "Hey, look Ma!  I'm gonna use my paws to fling my ball up in the air and then catch it in my mouth!  Aren't I clever?!"
Mom absolutely hates it when we say this, but Gandy was... SPECIAL. I don't mean that in a "he's magnificent, just look at how he rescued those three kittens and little Timmy from that well!" or "wow, that Gandalf is brilliant, see how well he can do complex math equations and bark the answers!" kind of way.
No, Gandy was Special in an "oh, what an absolute sweetheart, but... he's not too bright is he?" kind of way.
If you threw a treat in the air for Kaila, she would leap up and catch it mid-flight.  Do the same for Gandalf and he would duck, dashing an accusing "why are you throwing things at me?" look your way. Once the treat landed safely on the ground, he would gladly gobble it up.
Gandalf the Grey's namesake, the literary character of Tolkien's works, was a wizard known for being the wisest of his kind. Gandalf the Grey of the fuzzy canine variety did not quite live up to his name. He was very sweet and kindhearted, but wise and fierce he was not.
Case in point:
One day there was a purple taco chip sitting on the floor in between the refrigerator and the counter. The food and water dishes for the dogs were at the other end of the kitchen. Gandy took one look at the fallen purple taco chip and sat down. He refused to move and began to whine because he wanted a drink of water but there was this alien purple artifact blocking his way. He looked up at us as if to say "but mom! That thing might jump up and attack me! I can't go past that! Walk over it? Are you kidding? I don't know what that thing is, it might get me!" Mom and I just snickered, called him a wuss and stood back to watch the drama unfold.
After five to ten minutes of this, Kaila came sauntering into the room, took one look at the evil purple taco chip, sniffed it once, ate it, and walked on to the water bowl. The terrible, horrible, monstrous, dog-eating purple THING gone, Gandy joined Kaila for a drink of water.
~
Gandalf loved our neighbour Gary. He would dash across the lawn to literally leap into Gary's outstretched arms. At mom's command, he would also "walk Gary home" after visits, then dash back across the street to mom. When Gandy was about six months old, Gary and Heather were over for a visit and Gandy was planted at Gary's feet. Mom kept trying to warn Gary that the dog looked like he was up to something, but Gary, the good sport that he was, brushed it off and said Gandy was just fine where he was. When Gary got up to leave, displacing his adoring canine friend, we all glanced down to discover that about 90% of the cuff of one of his pant legs had been chewed loose. Mom was horrified and profusely apologetic. Luckily Gary has a very good sense of humour and did not seem at all upset by this discovery. In fact he appeared to be rather amused.
~
Gandy was always a bit of an odd pup. He was terrified of storm drains. He knew where every drain in the neighbourhood was located and would begin tugging on his leash about ten feet away to make a wide circle around each one. Every once in a while he would be distracted (perhaps by a desire to beg, borrow or steal tasty treats hidden in human pockets) and would forget to take his preventative measures. About a foot away from the drain he would realize his mistake and come to a complete stop. He would plant his furry front feet, tug back on his leash, and if given enough slack, sit on his furry butt and refuse to move another inch. All of this while whining like he was about to be murdered by evil purple taco chip monsters, or dog-eating drain dwellers. No! Way! was he going near that dog-eating drain!
Posted by Jeanie Tortoisefly at 8:41 PM

How to set up your tropical aquarium

A few years ago I took an online course through UBC.  Each week we had to do a small writing assignment.  One of the assignments I was task... 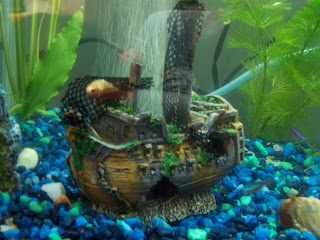